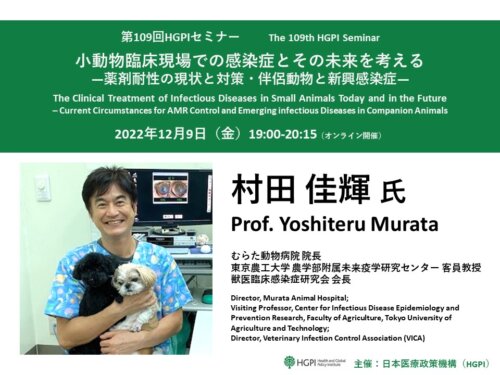 At the 109th HGPI Seminar, we hosted Professor Yoshiteru Murata, who is Director of Murata Animal Hospital and the Veterinary Infection Control Association (VICA) as well as a Visiting Professor at the Center for Infectious Disease Epidemiology and Prevention Research of the Tokyo University of Agriculture and Technology Faculty of Agriculture. Professor Murata gave a lecture on the theme of combating antimicrobial resistance (AMR) in small animals during which he reviewed his real-world clinical experiences and research to examine current circumstances in clinical settings and measures to control zoonotic infections based on the One Health approach.

Key points of the lecture

■ The threat of zoonotic diseases, a growing problem in recent years

Zoonotic diseases are infectious diseases that can spread from animals to humans and vice-versa. Every emerging and reemerging infectious disease that has troubled society in recent years has been of animal origin, and there is a growing sense of danger toward the infections that spread among humans, animals, and the environment under the concept of One Health. The concept of One Health considers humans, animals, and the environment as a single entity due the closely interrelated nature of their health. For example, it has been predicted that COVID-19 can spread to whales, dolphins, and other marine animals. Since the virus has been detected in sewage, some are concerned about environmental contamination. This is also true for AMR bacteria.

In addition, COVID-19 was transmitted from bats to humans. It also spreads easily to cats, as they are highly susceptible to the virus. Some are now concerned efforts to put an end to the COVID-19 pandemic will be hampered by the virus circulating from wild animals to humans, from humans to domestic cats, and then from domestic cats back to wild animals. It has been predicted that marine animals including whales and dolphins are also susceptible to COVID-19, so there are also concerns about environmental contamination. Other zoonotic diseases that have been recognized as problems in Japan include echovirus, leptospirosis, and an acute febrile illness called severe fever with thrombocytopenia syndrome (SFTS), which has been confirmed to spread from deer and ticks to humans. There is also the threat of extended spectrum beta-lactamase (ESBL)-producing bacteria being transmitted between humans (namely, pet owners) and animals (small animals and pets). It must also be noted that methicillin-resistant Staphylococcus aureus (MRSA) is spreading from humans to animals.

The basic form of infection control for zoonotic diseases is the appropriate treatment of animals that are sources of infection. Specific methods of doing so include disposing of their waste carefully and providing them with regular vaccinations. To prevent the emergence and spread of AMR and hospital-acquired infections at veterinary clinics, staff members are recommended to prevent their hands from getting rough by using hand sanitizers and creams. Pet owners are also given various instructions such as to avoid using antimicrobials that are not prescribed by physicians or veterinarians, to use antimicrobials for the duration prescribed by physicians or veterinarians, and not to stop the course of antimicrobials at their own discretion.

■ The circumstances surrounding the use of antimicrobials in small animals

Another topic of concern in recent years has been the increase in AMR bacteria in small animals. For all types of animals, antimicrobial usage rates are proportional to AMR rates, and given the possibility of overuse or misuse, steps must be taken to ascertain circumstances surrounding antimicrobial usage.

The systems surrounding veterinary antimicrobials are also improving. In 2014, a partial revision of a notice from MAFF titled “Handling Affairs Related to the Pharmaceutical Affairs Law” made it possible for human pharmaceuticals that are already in wide use for small animals in veterinary medicine to be granted special exceptions and undergo simplified clinical trials during the application process for manufacturing and marketing approval as veterinary pharmaceuticals. This will make it possible to further promote development and marketing for veterinary antimicrobials by converting human pharmaceuticals that are already being used in dogs and cats into veterinary pharmaceuticals. When this special exception is applied, information on effectiveness and safety must be gathered and submitted within two years of approval, so it is safe to say this system will also contribute to further promoting careful antimicrobial usage and stewardship, as well as assist efforts to ascertain sales volumes. There are few pharmaceuticals exclusively for use in small animals, so this is good news.

At Murata Animal Hospital, where I am Director, half of the urine isolates from both dogs and cats with bacterial cystitis test positive for Enterobacteriaceae. Our hospital regularly collaborates with a laboratory center where the most common bacteria detected in urine from small animals with bacterial cystitis is E. coli. Other bacteria they have detected include Klebsiella pneumoniae, Proteus mirabilis, Staphylococcus intermedius group members, and Coagulase-negative Staphylococci (CoNS). ESBL-producing bacteria and methicillin-resistant Staphylococci (MRS) appeared frequently in isolates.

Murata Animal Hospital also advocates AMR measures in ophthalmology, and the most common isolates in ocular infections (such as bacterial conjunctivitis and keratitis) are Staphylococcus intermedius group members. The most common ocular infection isolates in tests conducted by the aforementioned testing center were external commensal bacteria from the epidermis for dogs and oral commensal bacteria for cats. This may be due to the fact cats lick their forepaws when grooming their faces.

Looking at blood cultures of sepsis patients at Murata Animal Hospital from 2009 to 2014, 40 out of 216 cases were positive for bacteremia. The most common infection was pyelonephritis, followed by immune-mediated diseases like veterinary cysticercosis. Just like for cystitis, the most common isolates were Enterobacteriaceae species like E.coli. Candida species were also detected. E. coli also tended to appear frequently in isolates for cases of pyometra, regardless of sample type (including blood and uterine or abdominal fluid/pus). Septicemia in small animals is caused by bacterial translocation (BT) that occurs due to a lack of homeostatic balance resulting from compromised immunity in vivo. BT occurs when intestinal bacteria pass through the mucosal barrier of the intestinal epithelium to extraintestinal sites, where they cause systemic infection. As the intestines are home to trillions of microorganisms that form the intestinal microbiome and contribute to immunity in various ways, improving the intestinal environment is vital for controlling intestinal immunity.

The two most common types of AMR bacteria detected in small animals are ESBL-producing bacteria and MRS. MRSA is relatively rare. Tests isolating AMR bacteria in dogs and cats conducted by our partner laboratory have found a 40.8% carriage rate for ESBL-producing E. coli and a 57.5% carriage rate for methicillin resistance in Staphylococcus intermedius group members. In particular, MRS carriage rates have been increasing annually since 2005, when testing started. Furthermore, multidrug-resistant organisms appeared frequently in fungal isolates, particularly for candidiasis. Because of similar cellular structures among fungi (eukaryotes), there is great concern toward such infections spreading to humans. As previously discussed, there is also a risk of ESBL-producing E. coli spreading among humans (or pet owners) and animals (small animals and pets). There have been reports of MRSA infections spreading from owners to pets. In the future, it will be necessary to provide comprehensive monitoring of public health based on the One Health approach.

Together with other volunteer clinical veterinarians, I helped establish the Veterinary Infection Control Association (VICA) in 2013. Its mission is to accumulate clinically relevant data on infectious diseases in small animals and to build awareness toward infection control in small animals. VICA places particular emphasis on AMR and sepsis, and it is advancing activities under the following principles of infectious disease control.

The principles of infectious disease control

One specific effort VICA is making to combat AMR is promoting the use of antibiograms in veterinary hospitals. An antibiogram is a profile of antimicrobial susceptibility testing results for each bacterium detected in a hospital. VICA has successfully created antibiograms for each facility of its member hospitals to promote broad-spectrum antimicrobial stewardship. By restricting the use of fluoroquinolones, third-generation cephalosporins, fourth-generation cephalosporins, and carbapenems, utilizing compound therapy to cover the spectrum, and restricting perioperative antimicrobial prophylaxis resulted in a decrease in Methicillin-Resistant Staphylococcus Pseudintermedius (MRSP) and ESBL-producing bacteria and lower rates of tetracycline and fluoroquinolone resistance. These achievements have been reported in various papers and publications.

To promote treatments in small animal clinical practice that do not result in the development of AMR bacteria, in addition to developing testing and treatment guidelines for selecting antimicrobials (an initiative that VICA would like to focus on in the future), VICA plans to broadly expand its efforts to create antibiograms.

Points for clinical veterinarians treating pets and other prescribing parties to keep in mind to provide treatments that do not result in the development of AMR bacteria:

In addition, VICA is working to establish infectious disease networks. Efforts to build a network called the Chiba Prefecture Infectious Disease Network are currently advancing with leadership from the Chiba Veterinary Medical Association, the National Institute of Infectious Diseases, the University of Tokyo, and Tokyo University of Agriculture and Technology. VICA is also advancing efforts to extend that network nationwide together with the Japan Veterinary Medical Association and various regional veterinary medical associations. By aggregating information from veterinary hospitals in many regions together with testing centers, VICA aims to establish a system for centralized, real-time management of information on infectious diseases in small animal clinical practice.

The health of humans, animals, and the environment are closely interrelated, and enthusiasm toward engaging in cross-disciplinary collaboration and cooperation is precisely what is needed right now to implement the One Health approach, which views all three of these as one. Advancing infectious disease countermeasures in small animals based on One Health will help us control zoonotic diseases and AMR bacteria, thus contributing to a better future.

Prof. Yoshiteru Murata (Director, Murata Animal Hospital; Visiting Professor, Center for Infectious Disease Epidemiology and Prevention Research, Faculty of Agriculture, Tokyo University of Agriculture and Technology; Director, Veterinary Infection Control Association (VICA))
Professor Yoshiteru Murata graduated from Kitasato University School of Veterinary Medicine in 1980, where he also earned a Master of Veterinary Medicine degree in 1982. He then served at Sawaki Dog and Cat Hospital (now Sawaki Animal Hospital) and assumed the role of Director of Murata Animal Hospital in 1984. In 2009, he earned his Doctor of Medicine degree in Medical Mycology from Chiba University Graduate School of Medicine and Pharmaceutical Sciences. In Japan and overseas, he has authored a number of papers and books related to infectious disease in pets. He also serves as Director of the Veterinary Infection Control Association (VICA), an association of experts in clinical infectious diseases in small animals established in 2013, and was presented with the 2019 Award for AMR Awareness-Raising Activities by the Cabinet Secretariat for excellent practices in AMR control. His various efforts have included participating in surveys of AMR bacteria isolated from pets; formulating guidelines for veterinarians; and disseminated information on antimicrobial stewardship and its importance through speeches at academic conferences or related symposiums, by participating committees conducting case studies, and by contributing to various professional journals. He is working to advance AMR control in clinical settings for pets while taking One Health approaches that encompass humans, animals, and the environment into account.