On November 26, 2021, Health and Global Policy Institute (HGPI; Secretariat of AMR Alliance Japan) released new poll data on the threat of antimicrobial resistance (AMR), the natural process by which the microbes that cause infectious diseases grow resistant to treatment over time.
The new poll, conducted in October over the internet, asked a series of policy-related questions to a group of 1,000 people, selected without exclusion from a monitor panel of a research firm to be representative of the total population of Japan in terms of age, sex, and region.

Within the results of the new poll, nearly 60% of respondents stated that they would be willing to pay higher insurance fees to help support the development of new antimicrobials. 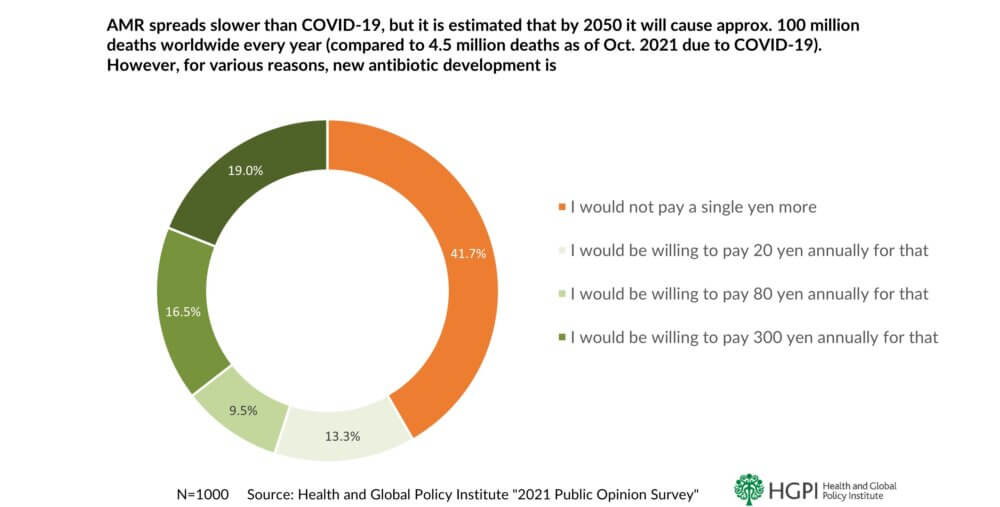 November is AMR Awareness Month in Japan. Additionally, November 18-24 was World AMR Awareness Week as declared by the World Health Organization (WHO). To support the goals of these initiatives, the poll also looked at awareness about AMR and antimicrobials.

Results are in line with previous, similar research done by HGPI, and by Japan’s AMR Clinical Reference Center, respectively, which has shown that the number of people in Japan with at least some knowledge of AMR has been hovering around 40% for a number of years. It is clear that more still needs to be done to spread the word about the “silent pandemic” of AMR, a major public health and economic threat to Japan.

Among the other results, one important message for policymakers is the impact of knowledge about AMR on willingness to pay for antibiotic development. Those with some knowledge of AMR were significantly more likely to say they would be willing to pay more to support new antibiotic R&D.

HGPI has been working for many years to enhance awareness about AMR and promote stronger countermeasures to this growing threat as secretariat of AMR Alliance Japan, a collaboration between Japanese medical societies, pharmaceutical and medical device makers, and civil society organizations. For more information on this project, please see here or contact info@hgpi.org. HGPI remains dedicated to doing its part on the advancement of policies that can protect the public from health threats like AMR.

■Spreading Awareness about AMR in the Month of November
In Japan, the Cabinet Secretariat has designated November as “Antimicrobial Resistance (AMR) Awareness Month.” This aligns with “World Antimicrobial Awareness Week(WAAW),” which has been set for November 18 to November 24 this year by the WHO. This year’s theme is “Spread Awareness, Stop Resistance.”